There’s been quite a bit of speculation as to who or what might be behind the proposed ban of stenography from Indiana courts. One reader provided a hunch. As it turns out, Steve Townsend’s TheRecordXchange was down in Marion County Courts making friends.

Now, I should note there’s no real direct proof that Townsend or TheRecordXchange were the driving force behind the ban proposal. But it’s a neat coincidence that they’re making inroads there right around the time such a rule change was proposed.

Maybe our problem is we’re not hungry enough. We sat on our superiority and rode it as far as we could ride it. These folks have been systematically making friends and pushing on our territory for years. I admire the sheer determination and business sense. I weep for us if we can’t get our act together and push back. Our collective resources are leagues ahead of anyone else. We should be able to do it. Apathy’s the only thing holding us back.

But will it much longer?

I attended the National Court Reporters Association Town Hall today with President Jason Meadors, and boy, am I glad I did. It gave me confidence that the association and its leaders are pushing hard to represent the interests of members. The entire session was almost exactly an hour, so there’s a lot to unpack.

Present at the meeting were, as stated, NCRA President Jason Meadors, Executive Director Dave Wenhold, Max Curry, a Past President and Chair of the A to Z committee, Annemarie Roketenetz, Director of Communications & PR, and Jocelynn Moore, Director of Government Relations. The meeting started off with a lengthy discussion from Max Curry about the A to Z program, and he took the time to explain where the program started and how it was completely revamped. According to Mr. Curry, A to Z began with about 50 boots-on-the-ground programs in the states. That fell away when the pandemic happened, and most programs closed. Programs in Texas, Tennessee, Minnesota, and California all went remote, which showed that the program could be done remotely. A new vision has come into place where the program can be done remotely and all of the resources can be centralized behind the program, with fewer boots-on-the-ground programs. Eight programs will be done a year, four asynchronous and four live. This is to capture the different kinds of learners — ones that can learn on their own AND people that need interactivity to succeed.

One of the truly exciting plans was for a landing page that can be centralized that brings people back to A to Z. NCRA is planning to reach out to organizations and associations to have them host a button or link to the landing page, creating a spiderweb or net that helps catch all the people that might be interested in this wonderful career and bring them back to the NCRA’s A to Z to give steno a try. They may ask firms to donate $5 to $10 of their Search Engine Optimization budget to help bring people to the landing page. NCRA President-Elect Kristin Anderson’s Houston President’s Party will act as a fundraiser for SEO dollars to ramp up advertising about court reporting and captioning as careers.

Lisa Dennison also spoke and informed us that 15 A to Z scholarships were given out at $750 per award. NCRA interacted with ASCA, the American School Counselor Association, getting school counselors’ contact information, adding them to a contact list, and getting them information about court reporting. It was mentioned that the communications team has been working on Instagram, QR Codes, and other ways to spread the message. Reliance donated money for student memberships for previous A to Z graduates, which helped grow association membership as well.

It was mentioned that NCRA continues to work with vendors such as Advantage, ProCAT, and Stenograph. The StenoCAT iPad app, iStenoPad, was also described as a way to simplify the logistics of getting stenotypes to participants.

It was explained that last year 295 students were picked up by A to Z. Max Curry clarified that some local programs do not coordinate with headquarters, so numbers from those programs are unavailable. Ms. Dennison asked that participant lists be sent to the NCRA so that better data can be compiled.

A quote by Brianna Coppola was shared. “I have never seen or heard of another ‘career test drive’ course. It really spotlights the encouragement within the community of reporters and their love for their jobs and dedication to the field.”

Dineen Squillante asked about the possibility of reaching out to departments of labor in each state. Lisa Dennison responded that it was something that could be looked into.

2022 Program Leaders and Speakers were thanked. It’s an extensive list, and I feel they deserve the recognition. 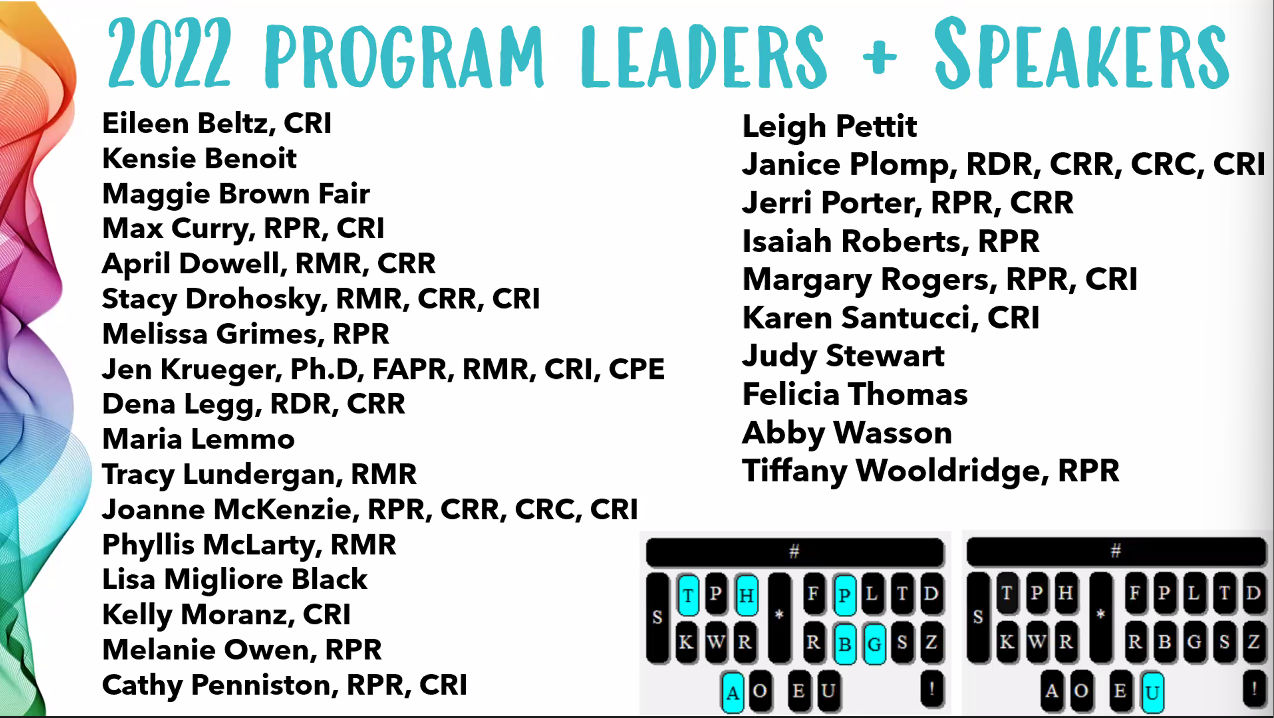 Ms. Dennison made it clear that the door was open to anyone that wanted to reach out on A to Z. 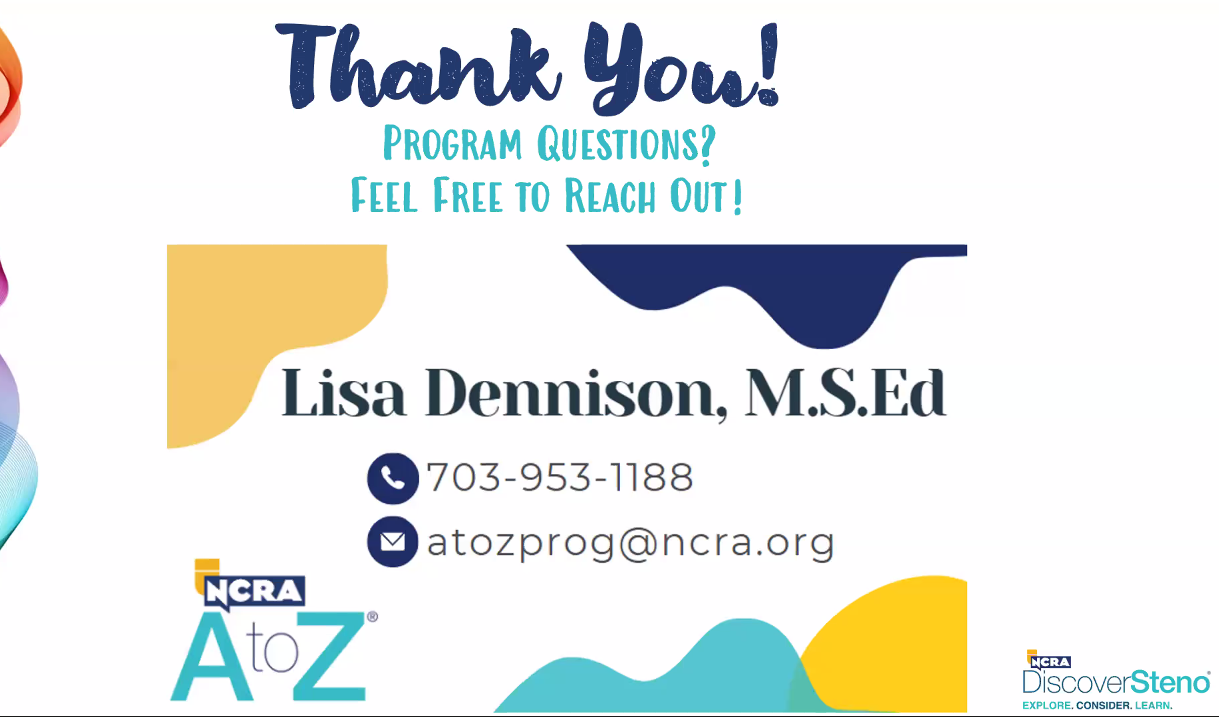 Annemarie Roketenetz talked a little bit about plants for Court Reporting & Captioning week, and a lot about the many endeavors of NCRA. She also mentioned that a number of press releases would be made, leading up to a larger press release that will link back to all the smaller ones. This is in line with dispatching our news and events regularly, and a very smart move on NCRA’s part. Several events were mentioned. Review the Town Hall recording at the Learning Center for more, I cannot do it justice in print. Our PR and communications are in good hands.

Mr. Meadors noted that Legislative Bootcamp has been called a “money grab.” He stated NCRA does not make money on bootcamp and reiterated what an important program it really is.

Jocelynn Moore expounded on bootcamp, explaining that it is extremely immersive training on how to be effective grassroots lobbyists. She stated that the training is “going to give you all of the tools necessary to go in front of a legislator, oppose legislation that doesn’t agree with the profession, or advocate for a bill coming through. Some of the topics covered will be “politics 101,” how associations work, and how you can mobilize with other members in your state to move forward on a particular issue.

The Training for Realtime Writers Act was mentioned. It was also mentioned that it will be difficult to reintroduce this under a Congress attempting to cut spending. More information will be provided on that at bootcamp, but also more on the situation from Indiana. Participants will learn how to advocate in front of different parties and teach members to speak to legislators, because legislators do not always have all of the information we have about our field.

Ms. Moore continued on to talk about the Indiana issue. The proposed prohibition of stenographers from Indiana courts was revealed. We learned that NCRA began a grassroots campaign to find out what happened and why the proposed change was introduced. The organization has found difficulty getting information about the change, but finds the language to be discriminatory and mandatory, robbing judges of their discretion and forcing them not to use a stenographer.

It was a packed hour. My only criticism of the event would be that they ran out of time for questions. But you know what? It happens. President Meadors directed that efforts should be made to record questions asked and that efforts would be made to have them answered. Everything wrapped up with Dave Wenhold thanking the participants for coming out on a Saturday. He said that if you get any information on Indiana, you can pass it to him or Ms. Moore. President Meadors noted that just showing up and asking questions meant participants were dedicated to the profession. The meeting subsequently came to a close.

Refinement of the programs we have is going to seize the day here. Leadership is doing something very impressive. My opinion may not count for much, but I’d thank each of them for the hard work that they do and continuing to fight for this profession. It’s inspiring, and I hope reading a little about it has inspired all of you.

The Learning Center can be used to locate and view past Town Halls.

There is a proposed rule change for Indiana courts that seems to point to keeping stenographers out of the courtroom. Big thanks to Steno Strong and the stenographers that brought it to my attention. It’s pretty straightforward.

Much like Arizona, Indiana is asking for public comment. I’m feeling less dramatic than usual, so I gave it a shot.

As I understand it, our institutions and many members of our community are already organizing a response. I would say get involved. Brainstorm on the best ways to phrase things or the right angle to go at this from. See if any attorney allies or anyone related to the legal field will pitch in a public comment. In my mind, it’s unquestionable that we have to give it to them straight. They’re handing an economic win to audio recording vendors. Once stenographic vendors are eliminated, price goes up. This is a concept so well understood that it’s part of the antitrust theory of predatory pricing. But there are probably dozens of arguments that I didn’t address that other stenographers can bring to the table more articulately.

This comes on the heels of the November 1, 2022 dissolution of the Indiana Court Reporters Association.

This is a convenient real-life example of how government impacts the demand for court reporters. They’re considering a rule change that would delete us from the courtrooms. They’re telegraphing a huge drop in court reporter demand. Is it any surprise that the market responds by training fewer court reporters? This is the deathblow I wrote about in 2018. How are we going to attract investors for stenographic education if a large purchaser of court reporting services, like the government, is saying “yeah, thanks for the memories?”

There were other comments far better than mine. Hopefully some of you will copy and paste yours below too.

We have to be assertive here. If not now, when? Again, public comments are open on the government site.

This article later came out about us being blindsided.